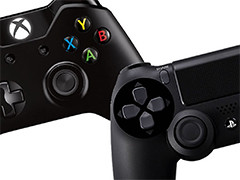 PS4 & Xbox One sales reach 3 million in the UK

Over 3 million PlayStation 4 and Xbox One consoles have been sold in the UK, GAME has revealed.

The retailer revealed the figure in its latest financial results, reporting that the two consoles had achieved an install-base of 3 million units by the end of January, “significantly ahead” of its expectations.

PS4 hit the 1 million milestone in September with Xbox One following in November, although it isn’t clear how current sales are split between the two consoles.

On a global basis, meanwhile, PS4 is believed to be significantly ahead of Xbox One with over 20 million consoles sold. Microsoft hasn’t updated its sales figures since November, when it announced it had shipped almost 10 million Xbox One consoles.

Software sales on PS4 and Xbox One grew by 118 per cent between November 2014-January 2015 over the previous year, GAME adds, with sales of last-gen software declining by 50 per cent.