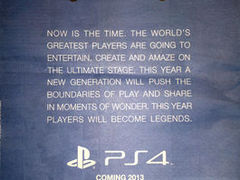 PlayStation 4 will launch in the UK in 2013, an advert in today’s Metro has suggested.

The full page PS4 ad appears in today’s edition of the national newspaper, which says that the console is “Coming 2013”.

You can see an image of the full ad above.

“Now is the time,” reads the ad. “The world’s greatest players are going to entertain, create and amaze on the ultimate stage. This year a new generation will push boundaries of play and share in moments of wonder. This year players will become legends.”

Sony has yet to formally announce a UK release date for PS4. Officially, the console will launch in at least one territory ‘holiday 2013’.

The advert is likely in response to Xbox One’s announcement earlier this week. Like PS4, Microsoft’s next-gen console is due out later this year.