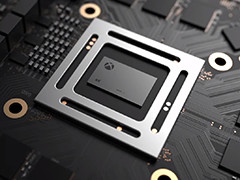 Project Scorpio will be 4.5x more powerful than the original Xbox One, head of Xbox Phil Spencer has confirmed.

Spencer revealed the number in a discussion with Giant Bomb (below), stating that the “Scorpio is more powerful than the original Xbox [One], four-and-a-half times.”

While the console’s full specs have yet to be confirmed by Microsoft, the console will include 6 teraflops of GPU power and be a “true 4K” console capable of delivering “high-fidelity VR”. The console is also believed to feature more RAM and improved memory bandwidth over the Xbox One’s 8GB DDR3, plus an improved CPU.

It is also expected to be faster than Sony’s upcoming PlayStation 4 Neo, which is reported to feature a 4.2 teraflop GPU. In fact, according to an analysis on Digital Foundry, the Scorpio’s GPU will be around 40% faster than the PlayStation Neo’s, “calling to mind the advantage PS4 had over Xbox One”.

During the same video, Spencer clarified comments he made yesterday, confirming that 1080p TV owners will actually notice a difference in games running on Scorpio.

Project Scorpio releases in holiday 2017. A price has yet to be announced.