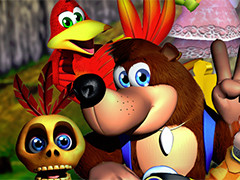 Playtonic has said that it would be “great” to see Banjo & Kazooie appear in an Xbox One version of its upcoming 3D platformer Project Ukulele.

Speaking on the developer’s forum, former Rare veteran Gavin Price discussed ways in which the two studios could potentially “cross-promote each others games” while explaining comments he made last week about the possibility of collaborating with Rare.

“I wanted to get across with my Rare comments how that even though we’ve left them, lots of people are still there who we consider to be our friends and of course we wish them well with whatever they do in their future careers,” he said. “I don’t see us collaborating on a game in future, more a sense that we help cross-promote each others games in fun ways if the chance arose either in Ukulele or other games we do in future.

“For example, IF Rare and MS were up for it, it would be great to have a certain Bear and Bird lost in one of our worlds and needing the help of our new heroes to get back (in return for a pagie of course! Maybe there’d be a single Jiggy in Ukulele hidden to give to BK and they give you back a Pagie). These could even be linked in to a stop and swap bit of fun between Ukulele and a Rare game, obviously all exclusive to an XBOX ONE version.”

Rare isn’t the only studio Playtonic would be happy to work with, though.

“Maybe other platform holders would agree to other mascot cameo’s too,” he continued.” It’s all just hypothetical right now! That’s all I meant by collaborating (in a nice little fun way aimed to give fans a little bit of fan-service!).”

Price also praised Xbox head Phil Spencer for being a “massive ally” to Rare throughout his time at the studio.

“Is Phil Spencer on these forums? If so I’d love him to read this (Hi Phil!),” he continued. “He’s been a massive ally for Rare over the years so it’s great to see him heading up the XBOX business – good times ahead all around I hope and the ultimate winner will be the fans!”

Playtonic revealed the first look at Project Ukulele earlier this month, teasing the first screenshots of what has been described as the ‘spiritual successor’ to Banjo-Kazooie.

A Kickstarter for the game is due to go live in May.