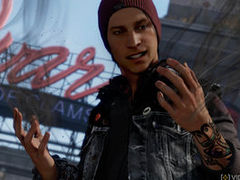 PS4 users eager to get their hands on a copy of Infamous: Second Son are being offered the chance to try the game out four weeks ahead of its official release next month.

From February 23 through to March 16, players will be able to head down to a participating GAME store to try out the open world action adventure, and be in with the chance to win some goodies.

In order to participate players must be aged 16 years or over and be a GAME Reward member, and sign up in-store to receive an entry ticket. For more details on participating stores, dates and times, head through to GAME’s website.