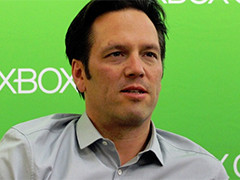 Phil Spencer has clarified comments he made yesterday about Microsoft’s upcoming console Project Scorpio, confirming that 1080p TV owners will notice a difference in games running on the new console, and that its 6 teraflops of power “will obviously impact the games in the way they play”.

Speaking to Giant Bomb (and uploaded by Gaming Dog), Spencer explained that he wanted to “clarify one thing because this is something I said yesterday around, if you don’t have a 4K TV what do you do with Scorpio?

“To me this is really around our motivation. Our motivation with Project Scorpio was with 4K coming – as you say, you see the TVs out there, we designed this console for that. And if you’ve got a 1K TV and… If you already have an Xbox One don’t go buy an Xbox One S thinking your games are going to play better. It’s not for [that]. If you like the design or you want the 4K streaming, great, HDR, great, but I’m not trying to upgrade you there.

“Scorpio is more powerful than the original Xbox [One], four-and-a-half times. And the 6 teraflops actually will obviously impact the games in the way they play.”

He continued: “If you look at a game like Halo 5, Halo 5 implements something called dynamic scaling, so as scenes get more complex, in order to maintain 60fps they will actually change the resolution that you’re running at. And they’re not the only game that does this. So then if you run that game on Project Scorpio you’re actually going to be at the max frame rate of that game more often.

“I’m not going to put that as a top-selling feature of Scorpio because not all games use dynamic scaling. I’m trying to be transparent with people about where we are in the design of Project Scorpio and what it was designed for. It was designed in order to enable these high-fidelity 4K experiences. So some of the existing games will actually run a little better if they’re using dynamic scaling, but I wouldn’t buy Scorpio to run your existing library of Xbox One games [better]. I wouldn’t suggest somebody does that.

“And then I get the question of well, if you have an HDTV and you don’t have a 4K TV, should you go buy Project Scorpio? And I guess some people will do that, and obviously Scorpio is going to be running the 6 teraflop version of a game, and that version of a game, even when downsampled to HD will look different than the game running at 1080p.

“But I still think of the complete Scorpio experience as somebody that has a 4K TV with Scorpio plugged into it. To take Scorpio and then plug it into an HDTV to me feels like you’re taking a 4K frame buffer and down-rezzing it to show it on your TV. And the box will have downsampling – it will obviously show up on an HDTV. But the real design point for us, the motivation behind Scorpio, was 4K gaming, 6 teraflops. Some developers will take advantage of that 6 teraflops in different ways but that was really the design point for Project Scorpio and the reaction of the dev community, and frankly the fans here at E3 has been fantastic.”

Microsoft won’t force developers to run games at a native 4K resolution on Scorpio either, he said, stating that he would “absolutely be open” to developers adopting a native 1K frame buffer and using the console’s power in other ways.

“We’re going to talk more specifics about Project Scorpio so we’ll get into more of the details,” he continued, “but I think creative freedom and how you want to use the power of the box is something that I would support. I came from first-party as you guys know, so putting the right tools in the hands of the best creators is our job as the platform.”

All Scorpio games will run on the original Xbox One and Xbox One S, however, Spencer assures.

The clarification follows an interview with Spencer posted yesterday where he said that Scorpio is “not going to do anything” for 1080p TV owners.

“Scorpio is designed as a 4K console, and if you don’t have a 4K TV, the benefit we’ve designed for, you’re not going to see,” he said. “Clearly, you can buy Scorpio, and if and when you decide you want to buy a 4K television to take advantage of the increased performance, obviously the console will be ready for you.”