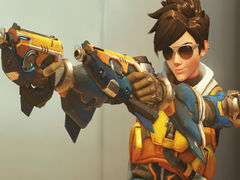 Overwatch is “one of the most successful global game launches of all time”, says Blizzard

Overwatch has clocked more than seven million players since its launch on May 24 for PS4, Xbox One and PC, Blizzard has announced.

These players have logged more than 119 million hours of game time, making Overwatch “one of the most successful global game launches of all time”.

Blizzard CEO and co-founder Mike Morhaime commented: “Over the months and weeks leading up to release we saw a lot of love and support for Overwatch – from Blizzard gamers, FPS fans, and people who’d never picked up a game like this before – and we’re very grateful for everyone’s incredible passion and enthusiasm.

“We poured a lot of effort into creating a game – and a new universe – that anyone could enjoy. We’re ecstatic to have had such a successful launch, and we’re looking forward to all of the fun, competition, and new content still to come.”

Blizzard certainly looked to be doing something right when the game’s open beta appealed to a massive 9.7 million players.

Those looking for tips on how to get started in the game should head over to our wonderful Overwatch Guides section.