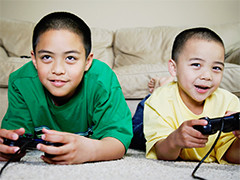 More than 50% of parents worry about their children’s safety when it comes to playing video games online, with almost one in five aware of online gaming being used “as a platform for their child to be bullied or verbally abused”, according to a new study conducted by advice website Get Safe Online.

According to the study, which surveyed 2,000 parents with kids aged 5-18 years old, 91% of parents allow their children to play games online despite more than half of them worrying about their online safety.

37%, however, feel as if they have “no control” over their children’s online gaming, with a third acknowledging that their kids play online at least once a day.

In reality, that last figure could be even higher, Get Safe Online speculates.

“In most cases, online gaming is fun, social and harm-free. But we need to be realistic that kids are naturally going to want to play games with their friends, but parents are right to be showing some concern about a world they are perhaps not familiar with themselves,” commented Get Safe Online’s CEO Tony Neate. “The risks range from downloading a computer virus, to bullying and even being targeted by an older predator with more sinister motives.”

Neate advises that parents “need to be switched on and have an open and honest conversation with their children, making sure they are mature enough to game online in the first place, and are aware of the threats and right gaming practices from the off.”

The site also recommends that children don’t respond to online bullying and that parents ensure they check each game’s age rating.