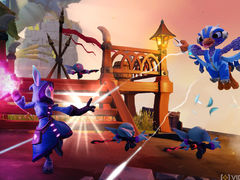 O2 has partnered with GAME to offer all customers a free set of Skylanders.

Available via the O2 Priority app, the deal offers fans the choice of a free triple pack from the original Spyro’s Adventure and follow-up Skylanders Giants.

But even if you haven’t got those games they may still be worth picking up. The characters are also compatible with later games in the series, including PS4/Xbox One’s Swap Force and Trap Team, and this September’s Skylanders Superchargers.

The deal is available in-store until September 21 or until stocks last. Only one pack is available per customer.

Triple packs available to choose from include:

The Skylanders take to the land, sea and air in brand new…

The Skylanders take to the land, sea and air in brand new…