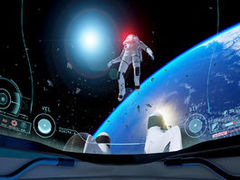 ‘No plans’ to bring Adrift to PlayStation VR

505 Games has no plans to bring first-person space experience Adrift to PlayStation VR, the publisher has confirmed.

The game debuted on Steam and Oculus Rift back in March and arrived on PS4 today, with many hoping that it would be ported to Sony’s headset this October. But that isn’t the case, a 505 Games spokesperson confirmed to VideoGamer today, telling us: “There are no plans to bring ADR1FT to PSVR at this time.”

As for a release on other platforms, such as Xbox One, 505 tells us that it is “still working on additional skus” and that it “will have news on those dates soon”.

Adrift tells the story of an astronaut stranded in space following a disaster aboard their space station. Many have called it to the ‘Gravity’ of video games.