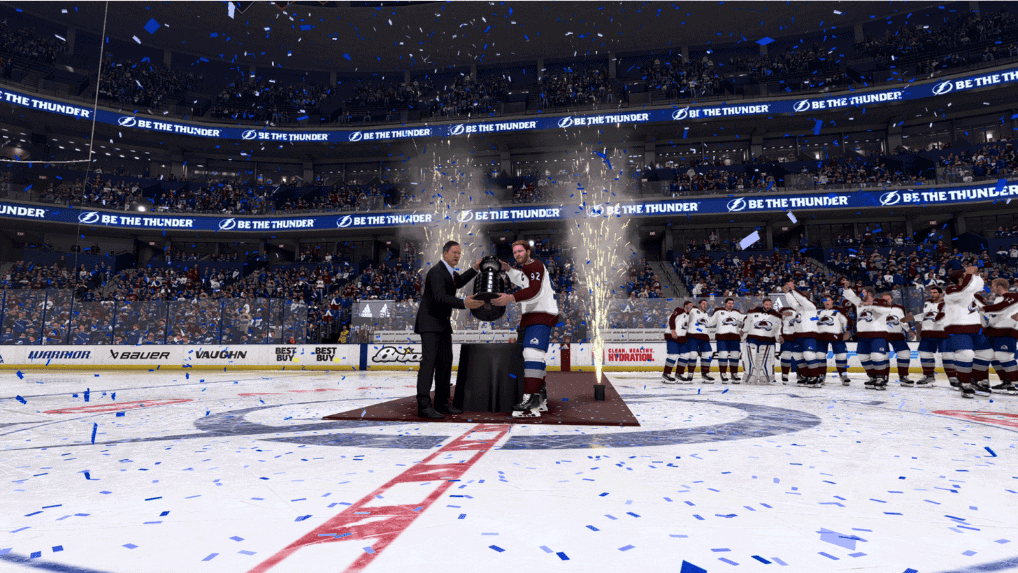 NHL 23 has been out since October 14th and there has been some lingering questions that have continued to pop up. At the forefront of the questions many fans have, is whether NHL 23 will allow for cross-platform play?

Let’s dive right in and see what’s in store for the fans eager to sink their teeth in the latest installment of the EA Sports hockey franchise.

NOW READ: In case you missed it, here’s the Top 5 Women’s Forwards in NHL 23.

YES! And some no. For the first time in franchise history, NHL 23 is cross-platform compatible. But, there is a catch.

The NHL 23 cross-platform matchmaking allows users of same-generation consoles on Playstation and Xbox to face off against each other. PS4 and Xbox One players can match up together. Likewise, Xbox Series X|S players can match with PS5 players.

Though cross-platform matchmaking does allow players to match up for online modes where they play against each other, players cannot invite friends or others from opposite consoles to their game mode to squad up together. EA did hint that they are striving to implement more crossplay features into future NHL titles.

Phase 1, which took place on November 17th, introduced the ‘HUT Rush’ and ‘Ones Eliminator’ crossplay modes. Following the first drop, came Phase 2 on November 21st, where NHL 23 added both the ‘6v6 EASHL’ and ‘3v3 Drop-In’ modes. Phase 3, which included the debuts of ‘HUT Champs’, ‘6v6 Drop-In’, ‘3v3 EASHL’, and ‘Threes Eliminator’, transpired on November 23rd. And the final cross-platform matchmaking release, will be Phase 4 on Monday, November 28th, which will be bringing ‘HUT Rivals’.

The leaderboards are separate between the consoles. The Hockey Ultimate Team auction house is also kept separate across console platforms. With increased sizes of matchmaking pools on both HUT and World Of Chel, it will now reduce wait times when finding opponents, which is a huge upgrade for the NHL 23 community.

Who Can You Play Against?

EA Sports has noted the challenges of placing all players onto a single unified server for NHL 23. Previously, users were segmented onto different servers. However, EA Sports has mentioned they have taken care to address desynchronization between the two console platforms.

When will cross-platform play be available in NHL 23?

The first phase of the cross-platform matchmaking release began on November 17th.

Who will I be able to play against?

Cross-platform play on NHL 23 will allow you to face users of the same-generation consoles. For example, PS4 and Xbox One players will be able to match up together.

Will I be able to play with same-generation console users?

Cross-platform matchmaking will allow players to match up and play against each other. However, players will not be able to invite others from opposite consoles to their game mode to squad up together.