New Sonic has been designed to appeal to Mario fans 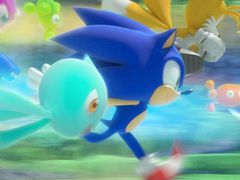 Sonic Team has made the startling revelation that the upcoming Sonic Colours for Wii has been designed so to appeal to the Nintendo/Mario fans.

Current Sonic Team boss and Sonic Colours producer Takashi Iizuka told IGN: “From a general game design perspective, in recent years we’ve been able to introduce Sonic to new fans, a lot of the Nintendo/Mario fans, and because of that, we’ve made changes to the design, and we’ve designed things in Sonic Colours that we think will really appeal to people who are unfamiliar with the Sonic brand and the Sonic gameplay.”

He added: “So from that perspective we hope that fans of Mario will really be able to enjoy playing as Sonic in Sonic Colours.”

Sonic Colours is scheduled for release November 12 for Wii and Nintendo DS.

Given the evergreen popularity of Mario it’s no surprise to find SEGA looking to Nintendo’s mascot for game design inspiration. Early reports suggest Sonic Colours could be the best Sonic video game for quite some time and while the franchise’s hardcore following might scoff at the idea of Nintendofying Sonic, SEGA has to look at the bigger picture – the millions of Nintendo gamers looking for a new game.