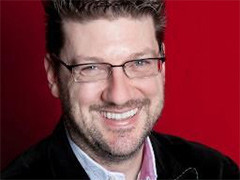 New PS4 and Xbox One franchise in development at Gearbox

Gearbox Software, the studio behind the great Borderlands franchise and not-so-great Aliens: Colonial Marines, has revealed it is hard at work on creating a new franchise for Xbox One and PS4.

Studio boss Randy Pitchford revealed the news on the Nerdist podcast, adding that Gearbox has delivered its final current-gen release with Borderlands 2.

“We’re not launching any new full products for the current-gen again,” he said. “We’ve launched the last of our current-gen products, and everything we’ve got in development is for next-gen.”

He continued: “We are building an original IP for the next-generation that we’ll announce some time later.

“Obviously we have Borderlands, we’ve got Brothers In Arms, we’ve got Duke Nukem and we acquired Homeworld recently, so we have all of those great brands, but we’re actually creating some news things that we’ll announce… So that’ll be something to look forward to.”

Perhaps the new franchise refers to a reworked version of Brothers in Arms: Furious 4, which was confirmed to have been altered into an entirely new game last year.