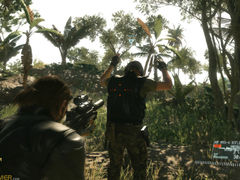 A new Metal Gear Online will be shown off at next Friday’s The Game Awards, the show’s producer Geoff Keighley has revealed.

Metal Gear Solid creator Hideo Kojima will be at the show to debut the world exclusive look at the game. This is the first of several planned world premiere announcements expected as the December 5 awards show.

We last saw Metal Gear Online as part of Metal Gear Solid 4 on PS3, but servers were shut down in June 2012.