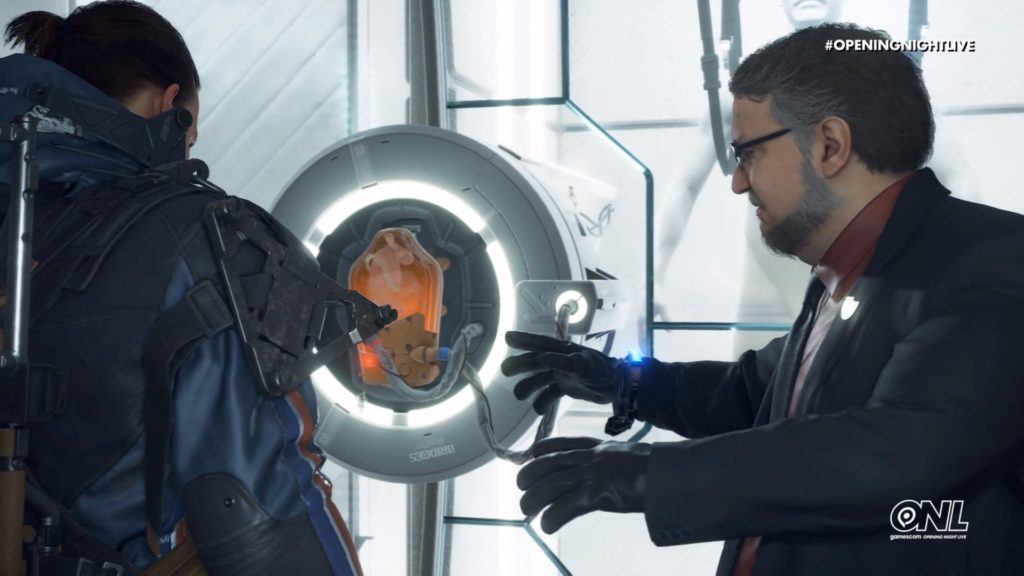 At Gamescom Opening Night Live, new Death Stranding gameplay was unveiled and, once again, we have more questions about what this game is really going to be.

Introduced by creator Hideo Kojima, the gameplay section began with Sam waking up and urinating. Urination is selected on a radial menu, and makes a mushroom appear. Referring to the connections present in Death Stranding, Kojima added that if multiple players wee on the same spot, that mushroom could turn into ‘something good later on’.

Sam deployed the ladder and climbed up to meet the holographic projection of a prepper with Geoff Keighley’s likeness. Preppers will be dotted around the open world, and will set you tasks or deliveries for rewards. Sam then fell off a cliff. This upset his golden baby quite a bit, and they must be rocked back to sleep using the DualShock controller’s motion sensors.

Kojima kept his cards close to his chest, but the aim of Death Stranding is to connect, or bridge, the cities across what was the United States. In his travels, Sam will encounter other characters whose storylines will run tandem to his. One of these characters is Mama, played by Margaret Qualley, and her baby. Mama’s baby was born on the Other Side, the world of the dead that Heartman explores for the BRIDGES initiative. The baby is invisible which makes it ok to show breastfeeding here and not on Twitch.

Guillermo del Toro's Deadman appeared in the second cutscene shown at Gamescom, and explained how Sam’s Bridge Baby allows him to see the BTs. The pods that the BB are incubated in mimic a dead woman’s womb so that the BB maintains its connection to the Other Side. BBs are not expected to ‘live’ for much longer than a year, so Deadman reminds Sam to not get too attached, because they are just ‘equipment’. Grim.

That’s all we got to see of Death Stranding at Gamescom Opening Night Live, but Kojima announced that more gameplay will be shown next month at the Tokyo Game Show. That Kojima Productions was happy to reveal cutscenes and lengthy gameplay now gives me hope that the crunch comment was lost in translation, and all is well on its development journey.

Death Stranding is scheduled to launch on PlayStation 4 on November 8, and will release onto PC some time later.