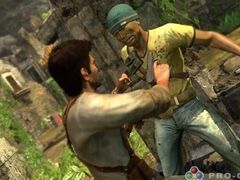 Sony has a few development studios up its sleeve, but few are more important than Naughty Dog. The developer, responsible for Jak and Daxter and more recently the brilliant PS3 action game Uncharted Drake’s Fortune, is seen by many as a jewel in Sony’s in-house development crown and it’s easy to see why. Despite Uncharted being the studio’s first PS3 game it managed to shame many other efforts – and that’s just the beginning. We spoke to Naughty Dog Co-President Evan Wells to find out what PlayStation 3 owners can expect in the future.

VideoGamer.com: Uncharted is now available in the US and Europe. Are you pleased with the way the game turned out?

Evan Wells: The whole team at Naughty Dog is extremely happy with how Uncharted turned out. It was a team effort and everyone’s dedication and hard work really came together in the end to create something that exceeded our expectations.

VideoGamer.com: Is there an aspect to the game that you aren’t happy with?

EW: There are a lot of minor things that we would have liked to clean up if we had more time. But overall we delivered the game that we set out to make and shipped it on time, so we’re very happy with everything in the game. But, the actual production of the game was pretty hectic and often stressful so if there is anything that I could say that I’m unhappy with, it would be what the team had to go through to reach the end goal.

VideoGamer.com: Why did you decide to go with a new IP instead of diving straight into a new Jak game?

EW: We knew that we wanted to do something brand new with our first game on the PS3. We wanted to push ourselves to deliver an experience that couldn’t have been created on the PS2. On past generations of hardware, we felt limited by the technology so we designed our games around stylized fantasy worlds. With the PlayStation 3, for the first time, we felt we could convincingly render human characters and real world environments so we decided to go for it. It was definitely a much more difficult proposition than sticking with Jak and Daxter but it really forced us to learn a lot and Naughty Dog is in a much stronger position for having made that decision.

VideoGamer.com: Uncharted is your first PS3 game yet it is at least on par with the best looking games on the system. How did you succeed where others have failed?

EW: I don’t think that others have failed, but I’ll take the compliment. I think the key to Naughty Dog’s success is the people we hire. Everyone is really driven to make the best video game possible. Across every department we have people that won’t accept mediocrity from their own work or from others. Nothing we do works the first time so we iterate over and over until everybody is happy with it. We have artists that ride the game designers until the gameplay is fun and we have programmers who get down into the nitty-gritty of animations with the artists until the movement is silky smooth. It’s these moments of collaboration that really bring out the best work.

VideoGamer.com: Do you think Sony’s first-party devs will always have the upper hand on the technical side of things?

EW: I don’t think that has to be the case. Sony is doing a lot to help 3rd party developers get the most out of the PlayStation3 like releasing the Edge libraries. They’re also reaching out to determine if there are other areas that developers are struggling with that they can improve. The PS3 has been out for just over a year now and I think that’s about as long as it takes for developers to get the hang of any system they might be working with. So I think you’ll continue to see all of PS3 development improve throughout the generation.

VideoGamer.com: Presumably the engine for Uncharted will evolve over time and be used in future projects… perhaps the next Jak and Daxter? Are there areas of the engine that you know need improving?

EW: Absolutely. We will continue to refine the Uncharted engine for years to come. With Uncharted we’ve only just started to tap into the potential of the PS3. Particularly with the Cell processor, we should be able to do a lot more. We’re already busy porting more of our systems from the PPU over to the SPUs and seeing huge benefits. There are also a lot of cool rendering effects that we’re experimenting with that will help with any game we develop with the engine.

VideoGamer.com: Many PS3 games haven’t faired as well sales wise as predicted, with the next big release always being the game that’s supposed to be the BIG ONE for Sony. How have initial sales for Uncharted been?

EW: The initial sales have been very strong. For a comparison, we are selling at a faster rate than the original Jak and Daxter which went on to do over 4.2 million units worldwide so we are confident that Uncharted will continue to do well.

VideoGamer.com: A sequel seems a given, but given that Lara Croft is hugely popular again, could we see Elena in her own game one day? What about an Uncharted movie? It seems like a perfect fit.

EW: Sure… anything is possible. We’re very happy with the reception that Elena has received from the fans. We were trying to create a female character which was new for video games; someone who wasn’t a stereotypical bimbo or a tough-as-nails bad ass. To be honest, we weren’t sure it would go over as well as it did. And as for an Uncharted movie, we would love to see that happen. Obviously we designed the game to be a cinematic experience and we too feel that it would translate well to the big screen. It’s a shame that most of the movies based off of games have been so poor. It makes it much more difficult for those that follow that really want to get it right.

VideoGamer.com: It’s often said that new hardware doesn’t drive original game development, but the best next-gen games released to date seem to harness the power to deliver experiences simply not possible on inferior hardware. What does the PS3 allow you to do that wasn’t possible on PS2?

EW: A huge number of things. For a start, as I mentioned before, the PS3 has allowed us to tackle subject matter that contains believable human characters in a realistic world. We simply couldn’t have achieved this level of immersion on the PS2. The additional processing power has also allowed us to do a lot of things with our AI that wouldn’t have been practical on past generations. This in particular had a huge impact on our gameplay. And, of course, being able to maintain responsive control with smooth human-like animation is due in large part to the tremendous amount of muscle found in the Cell processor.

VideoGamer.com: Why not embrace the PSP? Ready at Dawn did wonders with Daxter, but don’t you want to see what you could do with the hardware?

EW: The PSP is a great piece of hardware and we have looked into it. But ultimately the decision, for us, came down to wanting devote all of our efforts into a single engine on a single platform so that we could get the very most out of it.

VideoGamer.com: What’s your view on the shift away from hardcore gamers to appealing to everyone with so called ‘casual’ games? Is that good or bad for the industry?

EW: I think it’s great for the industry. I don’t see how more people playing games could be a bad thing. The only people I’ve heard complain are the hardcore that feel like “their” entertainment medium is being infringed upon by outsiders. But I think it’s cool to see the evolution over the last decade from a time when playing games was something only for geeks, to now, when it’s completely mainstream.

VideoGamer.com: Finally, what more can gamers expect from Naughty Dog games in the future? What will PS3 games look like in 3 years time?

EW: Well everybody is back after a hard earned vacation and the team is ready to dive into our next project. The most exciting thing for Naughty Dog’s future is the strength of the team that we have assembled and the technology that we have in place as we embark on our next game. We should be able to do so much more this time around, given the fact that we aren’t trying to build our engine and development environment at the same time we are trying to make a game. The effort can be much more focused on what we want to do, instead of how we want to do it. As for what games will look like in 3 years, it’s anybody’s guess. At Naughty Dog, we’re pretty sure we should be able to see leaps between games on the PS3 that are even bigger than they were on the PS2.