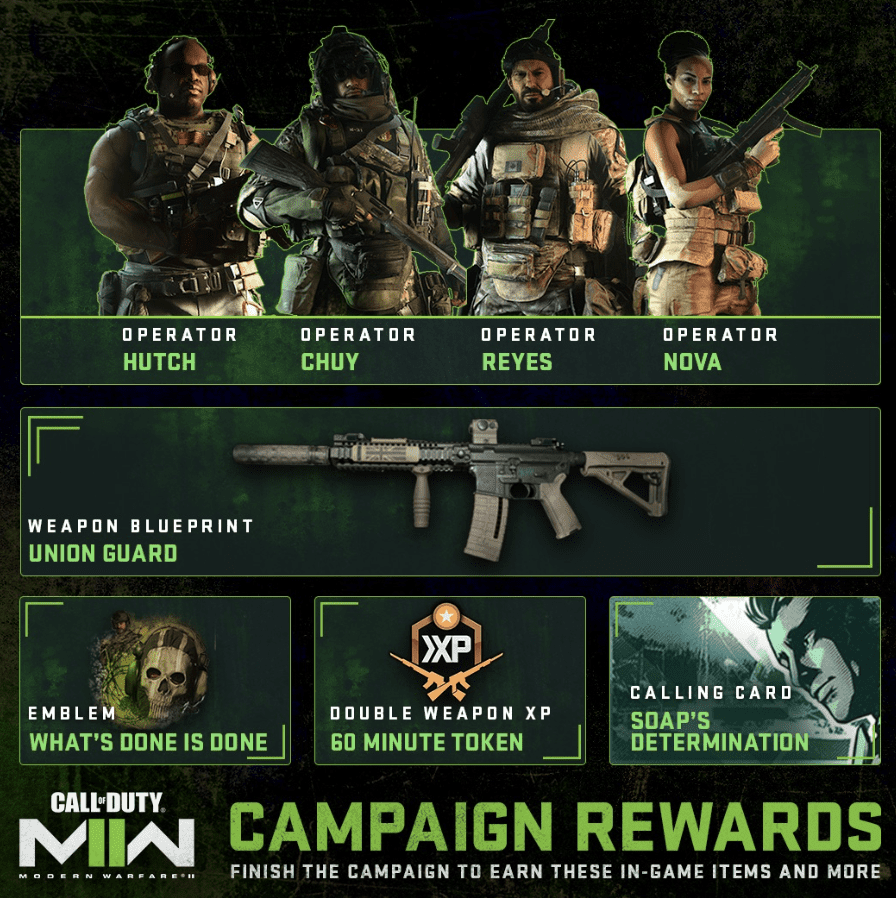 Sadly, for those only interested in multiplayer, you’ll need to wait until Modern Warfare 2’s full launch on October 28. However, don’t write off the campaign early access just yet. Activision has also confirmed via their latest blog post that should you play Campaign after October 28, these rewards are still available.

If you manage to finish the campaign, there are a ton of rewards available that can be used in multiplayer – and we’ve listed them all below.

REVEALED: Here are all the safe codes and safe locations in Modern Warfare 2

These items can be earned at any time by completing missions within the Modern Warfare II Campaign.

Here is the full list of Modern Warfare 2 campaign rewards.

To get them, all you need to do is complete the campaign. This can be done on any difficulty.

Additionally, if you complete the campaign, you will earn the Union Guard Weapon Blueprint – which is Captain Price’s signature weapon.

Sadly, as the game is now out – you’re not able to pre-order the game. But you can still grab these campaign bonuses just in time for when the multiplayer launches.

How many levels are in Modern Warfare 2 campaign?

BUY NOW: MW2 PlayStation Bundles Are Cropping Up – get yours now!

For those keen on getting the most amount of bonuses,, opt for the Vault edition, where you’ll get the Red Team 141 Operator Pack, FJX Cinder Weapon Vault, Season 01 Battle Pass, and 50 Tier Skips.

These will give you a headstart come MW2 multiplayer launch.

Does Modern Warfare 2 have a campaign?

Yes. The campaign follows on from the 2019 reboot of the Modern Warfare series, and will see the likes of Captain Price and Soap MacTavish return.

How long is Modern Warfare 2 campaign?

The Modern Warfare 2 campaign will clock between 6-8 hours, but may be longer if you’re playing on a harder difficulty.