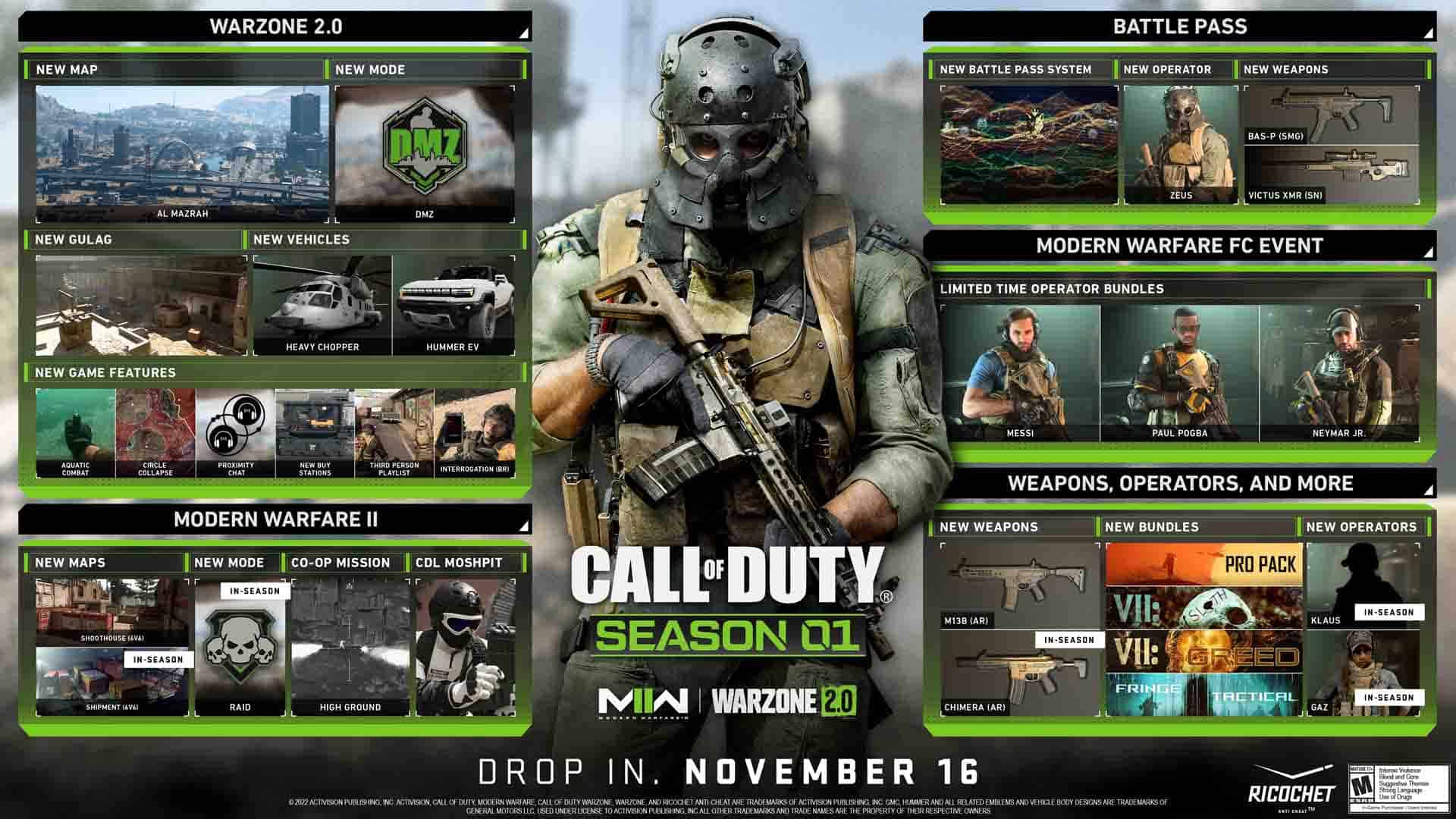 Modern Warfare 2’s season 1 Battle Pass content has started to go live regionally from now. While the official start time isn’t until 6pm, the Battle Pass tab is alreadyavailable for many people.

Following the game’s first couple of weeks, many players are now finishing up unlocking the launch content, and are already eager to get started on post-launch content like Season 1.

As has become the norm, this will take the form of various ‘seasons’ of content, with new cosmetics, ranks and more for players to earn by playing the game.

So without further ado, here’s everything you need to know about Modern Warfare 2 Season 1 – from the release date, to the Battle Pass and more.

When does MW2 Season 1 start?

The MW2 Season One officially kicks off on November 16, 2022. That’s the same day as the launch of Warzone 2.0 of course – which makes sense as the two games will share battle pass progression.

MW2 Season 1 will bring a new Spec Ops mission and map, Activision has confirmed – and it’ll also bring with it a brand new CDL Moshpit playlist, with a playlist that’ll have a Call of Duty League flavour to it.

Season 1 will also see the launch of DMZ mode for MW2 and Warzone 2. You can read up more about that here.

Originally, the update was set to arrive at the same time as the Warzone 2 preload, but was delayed for an unspecified reason. It seems whatever issue has now been resolved – and you should see the update download the next time you restart the game.

The official Call of Duty Twitter account has now revealed the roadmap for Season 1 and what players can expect in both Modern Warfare 2 and Warzone 2.

In Modern Warfare 2, the update will include two new maps including Shoothouse and Shipment, a new co-op mission, the CDL moshpit and Raid mode.

Both games will also feature an all new Battle Pass – which itself will include new weapons like the BAS-P SMG and the Victus XMR (SN) and new Operator Zeus.

Elsewhere, there’s further new weapons, new bundles and new Operators in the Store – including Klaus and Gaz, the latter from the game’s Campaign.

It’ll also kick off the Prestige system proper – you can find about all out MW2 Prestige right here.

NOW READ: Is the Modern Warfare 2 Vault Edition worth it? Find out here

Most items will carry across both MW2 multiplayer and Warzone 2.0. In addition, we know that MW2 Battle Pass progression will also carry over into Warzone Mobile, when that launches next year.

Activision has also released a trailer for the new Battle Pass, explaining how it works and how it’s changed from the previous Warzone.

The trailer first appeared on Call of Duty’s Australian channels as per CharlieIntel on Twitter – and was then posted worldwide a few hours later.

Check out the trailer for yourself down below.

The way you get your rewards is getting an overhaul too. While full details are coming next week, we’re told it’ll no longer involve a strict progression system with a specific thing unlocked every level.

Instead, your Battle Pass takes the form of a multi sector map, and every level you’ll unlock Battle Token Tier Skips. You’ll be able to use these tokens to unlock items, with every map including 20 sectors with five items in each sector.

It sounds somewhat similar to Fortnite’s Battle Pass system – as you’ll unlock the next sector once you’ve claimed enough rewards in a previous one – but we’ll know for sure next week.

The MW2 Battle Pass will cost you 1000 COD Points, which translates to around $10 of USD or local equivalent.

You’ll be able to skip tiers too, for a cost of 150 COD points per tier. If you’ve picked up the Call of Duty Modern Warfare Vault Edition, it comes with the Season One pass included – plus 50(!) tier skips. So if you want a headstart with the season, the Vault Edition is certainly worth it.

If you don’t have the Vault Edition then you can upgrade on PlayStation, Steam and Battle.net via an additional purchase.

There’s still plenty to get stuck into Before Season 1 kicks off, such as trying to unlock the Modern Warfare 2 Mastery Camos. If you get stuck, try out one of best loadouts – such as this one for the M4 – to help give you an edge.

Will MW2 have a battle pass?

Yes. Modern Warfare 2 will have a Battle Pass. For Vault Edition owners it’s included in the package, but for those who don’t have the Vault Edition, it’ll cost 1000 COD points or around $10.

What is MW2 battle pass?

The Modern Warfare 2 battle pass gives you a range of items to use in the game. It’ll include new weapons like the BAS-P SMG and the Victus XMR (SN) and new Operator Zeus.