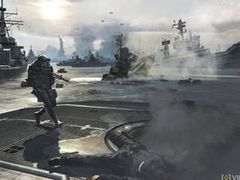 Infinity Ward has released a trailer promoting the two-player spec-ops survival mode ahead of Modern Warfare 3’s full multiplayer reveal at the Call of Duty XP event on September 2.

The trailer offers up no new information about the wave-based defence mode – which features explosive-strapped attack dogs, juggernaut invasions, and the ability to buy perks and upgrades with money earned by killing foes – but allows for the first public glimpse of the mode and some of its maps.

VideoGamer.com went hands-on with Modern Warfare 3’s two-player survival mode at E3 2011. “Is it even possible to get excited by a wave-based survival mode in 2011?” we beamed doubtfully, before deciding that, yes, it was possible. So there.