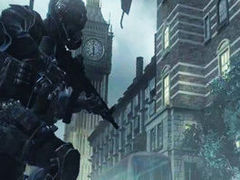 The tube chase was one of the most noticeable set-piece moments from the first Call of Duty: Modern Warfare 3 trailer, but in the actual game the sequence is somehow even more dramatic. It’s much longer, for a start, and the context is more fleshed out – you’re trying to stop terrorists deploying a chemical agent in Westminster. When the enemy-occupied tube carriage does derail the destruction is eminently more pronounced, too, defying the laws of physics to smash through ornate architecture like a cannonball fired at a greenhouse.

But the actual mission starts minutes before, as an SAS team is inserted into the Canary Wharf docklands to secure a suspicious truck and capture a high value target. The scenery doesn’t look exactly like London, but at least the skyline seems authentic. And it’s raining, which is totally accurate.

The sequence is a traditionally scripted affair, with you stalking through alleys and warehouses as your AI allies pick off enemy targets with set-piece precision. The glare of the red laser sights works particularly well against the inky blues of the scenery, and one moment has your team dispatch a row of enemy soldiers with a snap of deadly headshots.

It’s the classic Call of Duty sleight of hand trick, the scenario expanding and unfolding in front of your eyes regardless of player input. All you can do is sit back and marvel at the staggering production values and wait for everything to kick off.

The covert operation lasts about two minutes, though expecting more than two minutes of restraint in a Call of Duty game is like feeding a toddler six Mars bars and asking them to remain calm in FAO Schwarz. Soon your team gets busted in a warehouse, and the only logical response is to call in attack helicopters and jump through a first-storey window before sliding down a roof to get back to street level.

There’s not much new here in terms of weapons or equipment, however – just the standard assault rifle mixed with frag and flashbang grenades.

Then it’s a frenzied rush on the van by SAS forces, with allied air support taking out targets with thunderous miniguns, before realising the vehicle is empty – the weapons of mass destruction have been removed – and the terrorists are escaping with the deadly chemical payload.

Another chase ensues, but the terrorists manage to commandeer a Tube train and head into the Underground network. They’re heading for Westminster. You jump into a truck, equipped with a minigun, and give chase.

The action progresses, with you weaving through networks of tunnels, until you fly past a station riddled with civilians – their screams echo through the tunnels long after they ping out of sight. Eventually you manage to derail the train and, well, you’ve seen the rest.

Also, Craig Fairbrass is definitely back. Whether or not they’re trying to write Gaz or Ghost back into the story somehow is yet to be confirmed, but his distinctive voice is definitely there. Which is good, as it’s impossible to imagine a Modern Warfare without the dulcet geezer-twang of his “teem deffmatch” utterances.

Call of Duty: Modern Warfare 3 will be released worldwide on November 8 for Xbox 360, PS3 and PC. VideoGamer.com has also previewed the Manhattan level of the game.