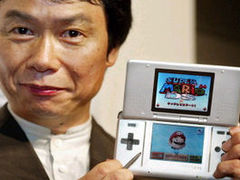 Miyamoto is reassured by physical media

Speaking to the San Jose Mercury-News, Nintendo’s Shigeru Miyamoto has revealed he’s not a huge fan of digital distribution and doesn’t see it taking over the video game industry.

“Personally, I’m one of those guys who, even if I have all the songs from iTunes, I want the CD as well. I feel more reassured with that physical media,” said Miyamoto. “Entertainment is something that will not just become digital. If I look at Wii MotionPlus, this is something that you’re not doing via digital distribution. The thing for us is we really don’t see the future of video games being merely confined to digital distribution or moving solely or even to a majority of our products being distributed that way.”

Is Miyamoto right: will traditional and digital forms of distribution co-exist for some time to come?