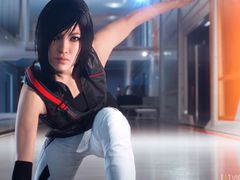 “We clearly see Mirror’s Edge as a franchise for the global TV audience,” said Sharon Hall, president of Endemol Shine Studios. “It has a strong female protagonist, a wildly rabid fan base and a worldwide brand that Electronic Arts and EA DICE have done an amazing job establishing.”

There’s no other info to report at this time, though Hall’s comments indicate the studio will stick with heroine Faith.

Endemol Shine is best known for Big Brother in the US, though has more recently had a hit with MMA drama Kingdom.