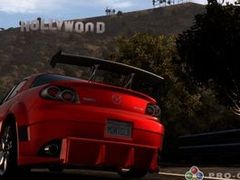 Midnight Club: LA will feature extensive vehicle customisation for both performance and appearance, with players able to fully personalise their officially licensed imports, tuners, classic muscle cars and motorcycles – inside and out. A huge array of licensed rims, spoilers, interior gages, tires and more will be available.

“From the beginning, Midnight Club has been about street racing in a open-world,” said Sam Houser, Founder of Rockstar Games. “With our team at Rockstar San Diego we have developed a game that we feel once again pushes the boundaries and expectations of what a racing game can be.”

The game also promises no load times, no rules and no tracks – the city of Los Angeles has been recreated and is an open playground for street racers.

In addition to Midnight Club: LA for Xbox 360 and PS3, Rockstar has announced the September release of Midnight Club: LA Remix for PSP. This portable edition is developed by Rockstar London and promises to take full advantage of the hardware to deliver an “unrivalled sense of speed and style”.