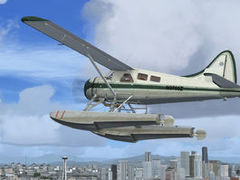 Updated on December 9, 2014 by David Scammell

The Steam release of the 2006 flight sim features over 20 aircraft, including commercial planes, fighter jets and helicopters, along with 80+ missions, Windows 8.1 support and “updated multiplayer functionality”.

Further details on the game’s multiplayer features have yet to be announced.

Dovetail says that the game will launch at a “spectacular introductory price”, with additional DLC to roll out in the New Year.

Dovetail announced that it had secured a licensing deal to re-release Microsoft’s classic PC flight sim earlier this year, with an original title based on Microsoft’s flight technology expected to launch in 2015.