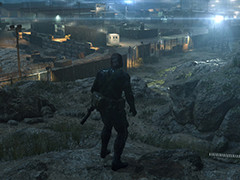 As you can see in the shots below, the PC port appears to offer significantly better visuals than the PS4 game, with additional lights and shadows per scene, enhanced level of detail over distances and screen space reflections.

Ground Zeroes launches on PC on December 18, with Metal Gear Solid 5: The Phantom Pain due to roll out on PS4, Xbox One, Xbox 360, PS3 and PC next year.