Meta Quest Pro specs and features, is it worth it? 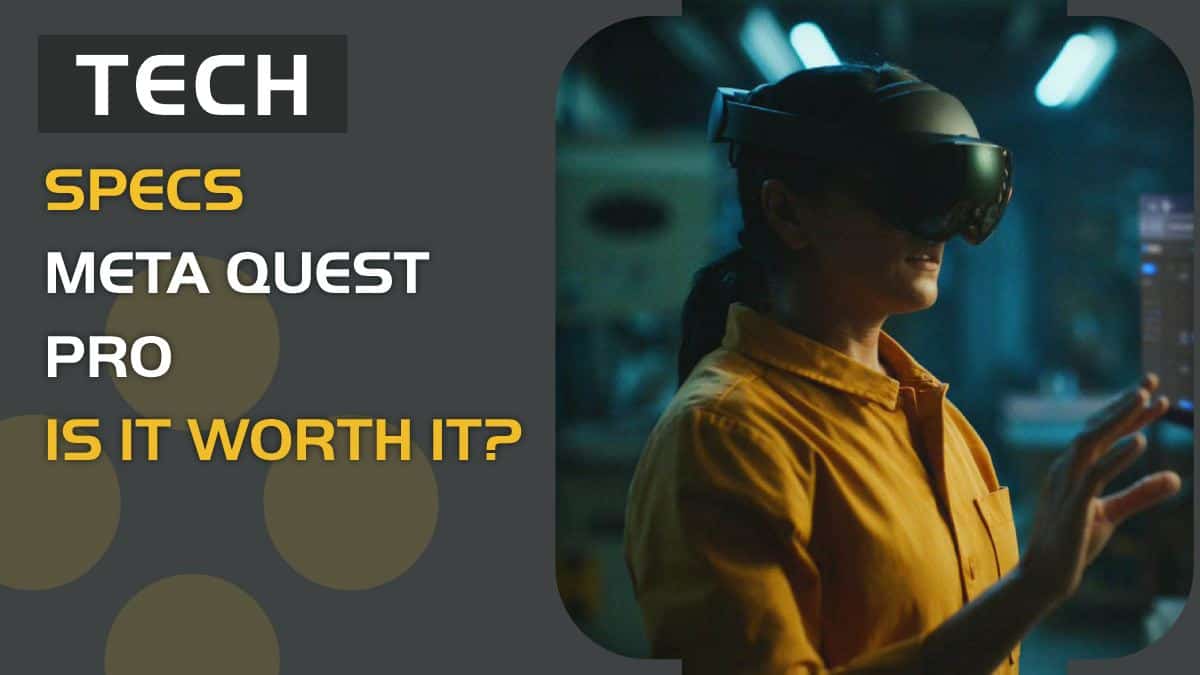 The Meta Quest Pro has now launched, and the asking price of $1,499 is a huge commitment. If you’re looking to buy one this year, you might consider looking at its specs and features to determine if it’s worth the money.

We hope to answer if the Meta Quest Pro is worth it by evaluating its specs, features, how it feels, and how it performs.

If you’ve tried to have a look at the Meta Quest Pro’s specifications, you’ll see that the site is very wordy and not very technical. We don’t like that, so to break it down here it is in a more accessible form for you.

The Meta Quest Pro specifications immediately sing of the technical worth of the product, so if these figures are anything to go by – it’s a worthy VR headset.

The impressive 1800 x 1920 displays support up to 8K resolution video at 60FPS, which while we expect to be more of a novelty feature at the moment as video shouldn’t generally be viewed past 24FPS, this is still an impressive feat for a VR headset.

One of Meta Quest’s best features is their discarding of the PC. Like the Meta Quest 2, the Pro doesn’t require a PC to run any of the games on it, which seems to be a step in the direction of the Metaverse which looks to disassemble our relationship with traditional hardware such as peripherals and monitors.

Is the Meta Quest Pro worth it?

The Meta Quest Pro is now released, and for most people the price commitment is extremely noticeable. You’d be forgiven for any hesitations or reservations you have on Meta’s new VR headset – so we hope to answer any questions you have.

The Meta Quest Pro is returning some shockingly positive results in terms of its use. The $1,499 price tag is to us, the biggest limitation of the headset. So, for something to have such a high price tag attached to it – its value needs to trump its cost.

We think it does.

For many – the biggest point of disappointment for the Quest 1 & 2 was the screen door effect. You might be able to see this for yourself if you’re on a 1080p monitor – it’s when you’re so close to a display panel that you can see the black empty space between lit pixels. It’s the same thing you notice when you photograph a digital display with a camera.

The Meta Quest Pro circumvents this in two ways. Firstly, the individual displays are 1800 x 1920 in resolution. When viewed up close, you’re experiencing a very minimal screen door effect. Secondly, the wide FoV acts as a psychological side-step to the screen door. Basically, you’re seeing enough dense visual information at any one moment that the screen door effect is much less noticeable.

If you’re someone planning to use the Meta Quest Pro to replace their workspace and you work in software with mostly white backgrounds – consider eternally enabling night mode in your software as the screen door effect is mostly noticeable against white backgrounds.

The Meta Quest Pro has the visual space to display a high FoV due to the pancake lenses, which both reduce the overall weight of the headset and increase the range of vision. This means that instead of moving your entire head and headset to browse through text, you can instead move your eyes as you would do in a physical workspace.

The new Quest Pro controllers have come leaps and bounds since the Quest 2’s.

They’re smaller, tighter, and really resemble the classic design of the Wii Nunchuk – which is a nostalgic touch.

A generous development from Meta is the removal of the tracking ring, which played a huge part in the Quest 2’s controllers feeling slightly clunky and detached from reality. Now, without them, the controllers feel much more liberated and closer to reality.

Ultimately, the Meta Quest Pro is a fantastic device in construction, build quality, and design. If you’re aiming to grab a headset that bridges the gap between gaming hardware and workspace innovation – this device is for you.

Who is the Meta Quest Pro for?

The Meta Quest Pro is designed for a huge range of users: gamers, entertainment consumers, developers, and work-use professionals.

One of Meta’s key features is their multi-tasking capabilities: “Pop open multiple resizable screens, work on new ideas, stream your feeds or message with friends. With this new superpower, multitasking has never been easier.”

The Meta Quest Pro is clearly aimed at an audience wider than gamers, with Facebook’s intentions clearly to lay the foundations for the impending Metaverse.

Is the Meta Quest Pro good for exercise?

The Meta Quest Pro is designed for business and gaming use, and VR has previously been limited in its use by the weightless controllers. Now, due to advancements in hand tracking on the device, it’s likely you can use your own weights with the headset on.

This reduces the weightless bottlenecks of exercising with older headsets, and offers a whole new variety of activities you can now engage in virtually.

Should you buy the Meta Quest Pro

Considering that the asking price is just shy of how much the RTX 4090 costs, consumers may be slightly hesitant to commit to such a huge asking price. This is understandable, especially considering you have the Meta Quest 2 as a valid option, alongside the upcoming PSVR 2 which is won’t cost more than $400 – $500.

The Meta Quest Pro is targeted at both entertainment consumers, gamers, but also developers, and tech professionals.

Turning an augmented reality environment into your new workspace seems like a hugely advantageous development, though this comes at a price. A very prominent and obnoxious price: $1,499.

The hardware specifications of the Meta Quest Pro suggest that the price-tag is worth it, though beyond that do you really need it? Are we at a point where the novelty of a VR headset proves itself outside of gaming? Our thinking is that we’re not at that stage yet. It is also a huge commitment for gamers when there’s other options soon to be available such as the PSVR 2 and the distantly releasing Meta Quest 3.

What’s included when you buy a Meta Quest Pro?

If you do decide to bite the bullet and grab yourself a Meta Quest Pro, here’s what comes in the box.

One of Meta Quest Pro’s highly desirable features is the lack of need for an external device. What’s more, everything you need to maximise both your workflow and gaming experience.

Is the Meta Quest Pro meant for gaming?

The Meta Quest Pro is essentially a bridge between gaming and work-use, so it is definitely meant for gaming use.

Is the Meta Quest Pro good?

The Meta Quest Pro is definitely a good VR headset, and is probably the most affordable headset meant for working and business usage. It is certainly going to be good for gaming, however the premium price is certainly something to consider.