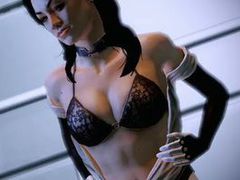 Mass Effect’s Miranda is defined by her sexuality

Miranda is no stranger to the close-up butt shot, but BioWare marketing director David Silverman says it helps define her.

“The fact is, some characters are defined by their attractiveness, such as a woman who is genetically engineered to be perfect,” he explained to VG247.

“Camera angles help tell the story and portray key aspects of each character – in Miranda’s case, her curves and sexuality.”

Speaking of BioWare making the most of the Mass Effect characters’ assets, the studio recently released a shot of a rather buff James Vega.

Mass Effect 3 is scheduled for release March 9, 2012 for Xbox 360, PS3 and PC, but fans will get the chance to try out the title at GAMEfest this September.

It’s also unlikely this is the end for the franchise, with BioWare stating it’s seeking the right way to continue Mass Effect.