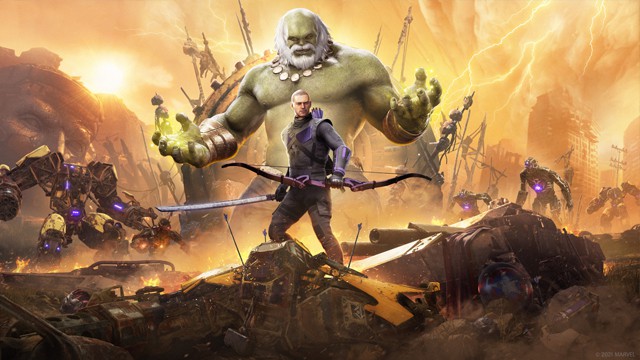 Crystal Dynamics has announced that it will be showcasing the second free DLC Operation Hawkeye – Future Imperfect for superhero team-up Marvel’s Avengers in a War Table broadcast scheduled for next month.

While part one focused on Kate Bishop’s version of the character, part two catches up with original Hawkeye Clint Barton. As the title Future Imperfect implies, there’s some time travel twistedness to be expected, and a very different looking Hulk making up just a part of the story as Barton attempts to return to his own time and reunite with Bishop and the other Avengers.

The tweet also reveals that we’ll be getting an update and look at the promised next-generation upgrades for the game, which were originally planned to roughly release in time for the Xbox Series X|S and PlayStation 5’s release but were delayed for the studio to work on improving the existing game and getting the DLCs up to a better standard of polish.

Hopefully, we’ll get to see the results of that extra work next month when the War Table broadcast goes down on February 16. Meanwhile Marvel’s Avengers is available now on Xbox One, PlayStation 4 and PC and you can check out our review over here.