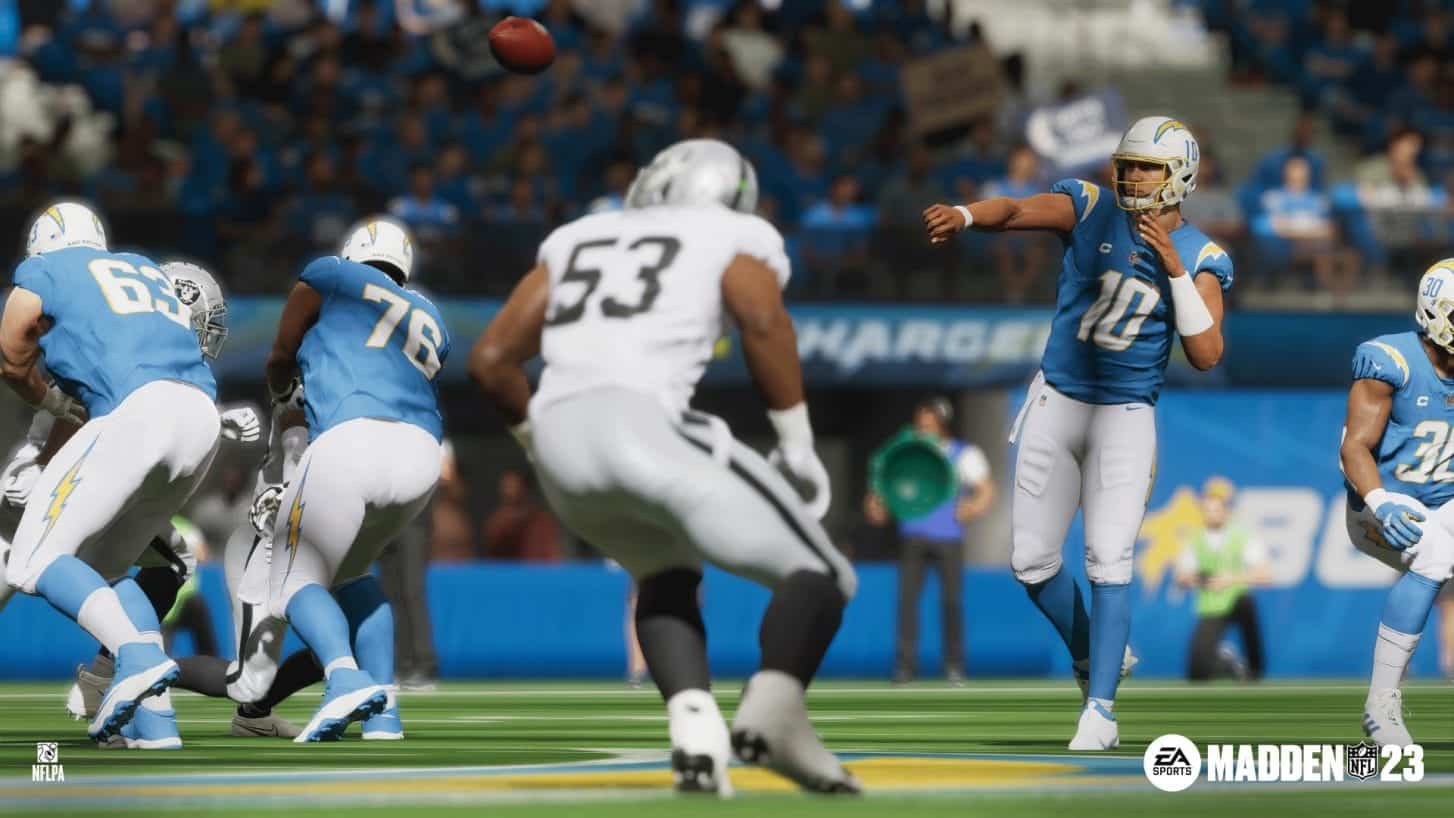 Week 10 of the NFL regular season is officially complete and is accompanied by yet another Madden 23 TOTW reveal.

Lots of special storylines and performances graced the NFL over Week 10, including the NFL’s first trip to Germany. The Tampa Bay Buccaneers and Seattle Seahawks played against each other at the Allianz Arena in Munich, which resulted in a thrilling 21-16 win for the Buccaneers.

Following this international showdown, several other NFL games also came down to the wire, with two having to go into overtime. That said, of all the NFL standouts from Week 10, who can we expect to see featured on Madden 23’s latest TOTW?

NOW READ: Missed the Madden 23 Week 9 TOTW? Check out all the players here.

Today at 10:30AM ET on ‘Good Morning Madden’, Madden 23 revealed its Week 10 TOTW that will be released in-game today at 5PM ET.

Without further ado, here’s a look at the full list of players that were selected for the Madden 23 Week 10 TOTW.

Offensive Player Of The Week (93 Overall)

The Offensive Player Of The Week for Week 10, is Minnesota Vikings wide receiver Justin Jefferson, and frankly, there shouldn’t be much of a discussion on this.

In what was easily the game of the week between the Buffalo Bills and the Vikings (Super Bowl-like if you asked me), Jefferson had not only a historic day, but one legendary catch that resembled that of the one completed by the great Odell Beckham Jr. In fact, Jefferson’s catch alone earned him this TOTW honor single-handedly.

In the Vikings 33-30 overtime win, Jefferson had 10 receptions on 16 targets for 193 receiving yards and a touchdown, plus a ridiculous ‘Catch of the Year’ play.

Defensive Player Of The Week (93 Overall)

As a result of how good that Bills and Vikings game was, Madden 23 decided to give their Week 10 Defensive Player Of The Week honors to yet another Viking talent; veteran, three-time All-Pro cornerback, Patrick Peterson.

In the Vikings thrilling 33-30 win, Peterson had four total tackles and two huge interceptions. The first interception took place in the fourth quarter and led to a Vikings touchdown to make it a four-point deficit, while his second came in overtime to seal the Vikings unbelievable victory. Without Peterson’s two interceptions, who knows if the Vikings would have pulled off that big win.

Ever since the Madden 23 Week 7 TOTW reveal, Madden 23 now releases two Limited Edition (LTD) players for every TOTW drop. These two LTDs usually consist of two active players in the NFL (one offensive, one defensive) that had special performances in previous seasons on the same game week MUT is celebrating.

Here’s a look at the two LTDs that were selected for the Week 10 TOTW:

In the Buffalo Bills Week 10 41-10 win against the New York Jets in 2018, left tackle Dion Dawkins came in as an eligible receiver and caught his first career NFL touchdown. As a result of this special moment, Madden 23 felt it was only fitting to have Dawkins be one of their Week 10 TOTW LTDs.

In the Cardinals Week 10 loss over the Tampa Bay Buccaneers in 2019, middle linebacker Jordan Hicks had himself nine total tackles, one interception, and a pass defended. The former Cardinals linebacker and Super Bowl Champion had himself quite the day and Madden 23 felt Hicks was worth recognizing as their second Limited Edition player.

Because of his magical play against the Detroit Lions over Week 10, Justin Fields has returned to this weeks’ TOTW once more, this time in the form of a Limited Edition Record Breaker.

Despite coming up just short to the Lions 31-30, Fields became the first player in NFL history to rush for over 100 yards, rush for two touchdowns, and pass for two touchdowns in a single game. Fields set this record with a 147 yards rushing on the day to go along with 167 yards passing as well.

Because of his historical performance, Madden 23 decided they had no choice but to honor the youngster’s brilliance with a Record Breaker LTD card.

To add onto their new TOTW release, Madden 23 did announce that they will have the International Program TOTW player George Karlaftis available in-game starting today. In case you missed that stream several weeks ago, Karlaftis will have all the chemistries of each NFL team that played an international game this season.

Over the last four weeks of the TOTW Program, Madden 23 has been having ESPN Fantasy Football Analyst Matthew Berry select a Hero every week for the rest of the season.

For those of you that don’t know, Berry’s Madden 23 Heroes come with two versions. One is usually the rating of a Hero (so 90 overall this week) and the other is a BND version (now 85 overall) that you can unlock by completing in-game challenges.

Should you collect all of Berry’s premium Hero players (all of the 89 and 90 overall versions), you will receive an exclusive player reward come the end of the season.

For Week 10, Berry selected CeeDee Lamb as his TOTW Hero. In the Cowboys tough 31-28 overtime loss to the Packers, Lamb had 11 receptions for 150 yards and two touchdowns.