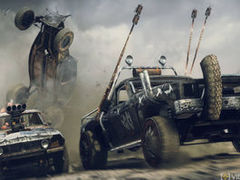 A new Mad Max Trailer has been released by Warner Bros. which takes a look at the various fortified garrisons, or strongholds, located throughout the open world of the post-apocalyptic Wasteland.

In the trailer Max is seen visiting some of the game’s many strongholds and encounters a number of characters, including Jeet, Gutgash, Pink Eye and Deep Friah.

Mad Max will be released on September 1 for PlayStation 4, Xbox One and PC. Pre-order Mad Max now.