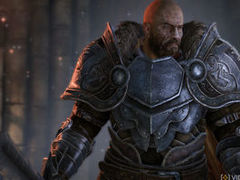 Lords of the Fallen 2’s executive producer Tomasz Gop has left CI Games after a clash of ideas for the future of the franchise, the developer has revealed.

“We’re grateful for his input, but we have different visions for further development of the series and Tomasz will not be a part of CI Games’ progress,” said CI Games in a news conference today seen by Eurogamer Poland.

“We want to reach a wider audience for this game. That’s why we’re building a richer story. We’re aware that these aspects could’ve been better in first game, so the story is a big point of the sequel, along with robust fighting system. We want to bring something fresh to RPG games.”

In an email sent to Eurogamer, Gop said: “I want to respect CI’s will to keep that [the reasons for their parting] between me and them. I wanted all the best for Lords but there’s going to be someone else leading the project and we’ll see if it will make it more successful than I could.

“I made [up] my mind a couple of days ago,” he added, “we just wanted to figure out the best communication for both sides.”

Lords of the Fallen 2 will enter full production later this year with a release scheduled for 2017.