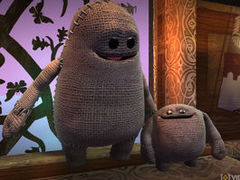 LittleBigPlanet 3 has been in development for 3 years

Sumo Digital has been working on LittleBigPlanet 3 for 3 years, design director Damian Hosen has revealed, suggesting that work on next month’s platformer may have begun shortly after the release of 2011’s LBP2.

“In the early stages we were in regular contact with Media Molecule,” Hosen said while discussing the game’s beginnings in the latest issue of MCV.

“That was really valuable for us. It’s a series that’s been built from an entirely fresh perspective. That’s true of all Media Molecule games. The studio’s never going to make anything like anyone else. And part of that is that they set themselves very clear targets and goals when they start making something and have a very clear unique vision.

“So when we went to talk to Mark Healey [Media Molecule creative director] and Kareem Ettouney [Media Molecule art director] it was really cool to get a sense of what they were thinking, how the game came out like it did, what was their vision for it, what limitations did they put on themselves. Kareem said to me that the Story Mode that you release is an example of what you make in Create mode. That made everything make sense. It all just clipped into place. I can completely understand why the game was like it was. Those personal insights we got from them early on were invaluable in shaping how we made the rest of the game.”

He continued: “We’ve been working on the game for three years now, we’ve spent a lot of time to add in a lot of stuff. We’re making really a fun charming platform game that anyone can enjoy.”

A video purporting to show the differences between the PS3 and PS4 versions of LittleBigPlanet 3’s closed beta appeared online yesterday, showing some noticeable improvements in texture resolution and character models on the current-gen release.

The full game launches on both platforms on November 28.