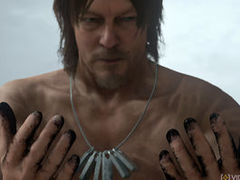 We’re still not entirely sure what exactly Death Stranding is, but during Sony’s pre-TGS conference this morning Hideo Kojima took to the stage to offer some tiny nuggets of info.

The game will be open world and with that comes a “degree of freedom”. There will also be a story for players to experience whilst exploring the open world, plus “some online elements”. Sounds much like a game then.

Kojima also chatted about whales and dolphins, and how they can find themselves stranded either dead or alive. We’re pretty sure neither sea creature will play a major role in Death Stranding.

4K and HDR support was also reconfirmed, and Kojima said he has settled on a game engine, though didn’t say which.

The following image was also released, showing who we believe to be Guillermo del Toro, Norman Reedus; Hideo Kojima and a fourth person we can’t place.

Kojima also announced he’ll be at the PlayStation Booth this weekend at TGS and is ready to answer your questions.