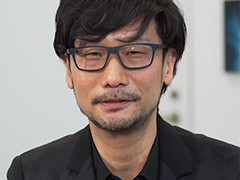 Kojima confident Death Stranding will be his ‘best work so far’

Metal Gear Solid director Hideo Kojima has said that he is confident his next game, Death Stranding, will be his “best work so far”.

Speaking at this morning’s Develop conference (as reported by Digital Spy), Kojima explained: “So far, when I’ve been making games, I’ve had to give up on something or at least compromise on something in order to get things done.

“But this time, working with you (Mark Cerny) and you bringing the state of the art technologies, we will get around that. I’m very confident that we’re working towards something completely new and that no-one has seen so far. This will be my best work so far, I’m very confident about that.”

Kojima left his former employer Konami late last year to launch the new Kojima Productions following reports of a dispute between himself and senior management. During his time at the publisher he worked on the entire Metal Gear series, plus Zone of the Enders, Castlevania, Snatcher and more. His latest title, Metal Gear Solid V: The Phantom Pain, scored a 93 and 95 Metacritic rating on PS4 and Xbox One respectively.

Death Stranding, meanwhile, which stars The Walking Dead actor Norman Reedus, is being published by Sony and is expected to launch on PS4 and PC. A release date has yet to be announced.