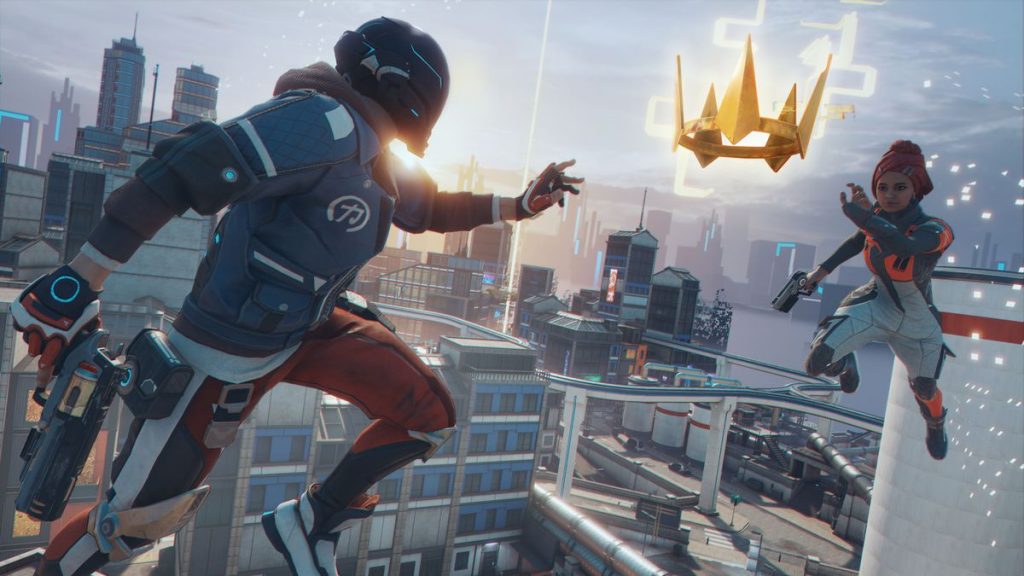 The game shares a lot with other battle royales: there are a maximum of 100 players fighting in a map that slowly shrinks over time, and weapons are dotted around the world. However, Hyper Scape is set in the year 2054 where the fictional tech giant Prisma Dimensions sells experiences in the Metaverse, which is where players land. The city of Neo Arcadia is the stage for the sport called Crown Rush (it’s basically like the Apex Games in Apex Legends).

What’s new in Crown Rush is that once the final ring of the map materialises, a crown appears somewhere in this small section. Whoever is able to hold on to the crown for 45 seconds is automatically declared the winner, regardless of the number of players or teams left. In addition, Neo Arcadia is a malleable space, where players acquire Hacks. These offer abilities like transforming into a bouncy ball or going invisible for a short period of time. Players may only hold two weapons and two Hacks at a time, but Hacks may be swappable in a round.

When a player is eliminated, it’s not necessarily the end of the story. They’ll become an Echo, which is a nebulous hologram of their character. Echoes are able to wander the map but they aren’t able to engage in combat. Instead, these players’ role is to ping items and points of interest, and scout ahead to warn teammates of danger. If a teammate kills an enemy player, they’ll drop a restore point which lets the Echo respawn and return to the fight.

Finally, the AI grandmaster of Crown Rush changes the game whenever it pleases. It will reveal every enemy on the minimap, or provide infinite ammo for weapons, or mess about with gravity for a real challenge. And, Hyper Scape’s Twitch integration allows viewers to vote on what the next modification to the world will be.

Sounds good? Then this is how you get involved. There is a tech test happening right now, with streamers playing the game and offering Twitch drops for viewers to gain access to Hyper Scape. The game’s official Twitter account has supplied instructions on how to be in with a chance for a key:

Hyper Scape is in development for PC, PlayStation 4, and Xbox One. Watch the world premiere trailer below.