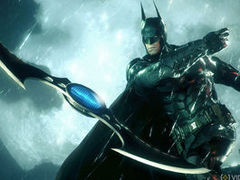 Has Batman: Arkham Knight’s Limited Edition statue given away a major plot spoiler?

The first image of Batman: Arkham Knight’s Limited Edition has appeared on Amazon – but the statue included in the box may have given away a major plot point in this summer’s game.

If you want to go in to Arkham Knight completely spoiler-free, don’t scroll any further.

As pictured above, the statue features Batman posing above Gotham City along with a message that appears to read:

“From a Grateful City In Memory of the Gotham Knight”

Does Batman die in Batman: Arkham Knight? And if so, will you get to play as the Arkham Knight in his place? We’ll find out for certain when the game goes on sale on June 2.

For now, though, if you’re interested in getting hold of the Limited Edition yourself you can pre-order it from Amazon for £79.99.

UPDATE (7 Jan 09:17): Whoops! Amazon’s replaced the spoilerific image of the Limited Edition statue with one that simply reads “The Gotham Knight”.