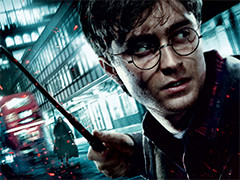 Harry Potter spin-off ‘Fantastic Beasts and Where to Find Them’ will receive its own video game to tie in with the film series, Warner Bros. has announced.

Though details on the game have yet to be revealed, including who will be developing it, it’s likely that it will follow the events of the film, which is expected to be set in New York 70 years before the start of Harry Potter’s adventure.

Fantastic Beasts and Where to Find Them was announced by Warner Bros. earlier today, who confirmed that Harry Potter author J.K. Rowling would be returning to pen the screenplay.

The film – and presumably the game – will be set in a “wizarding world” filled with “magical creatures and characters, some of which will be familiar to devoted Harry Potter fans.”

Rowling considers the sub-series as “neither a prequel or sequel to the Harry Potter series, but an extension of the wizarding world”.

Fantastic Beasts and Where to Find Them first launched as a book in 2001, which purports to be a reproduction of Harry Potter’s textbook.

Release dates for the film and game have yet to be announced.