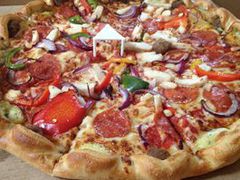 The dough is basic but effective, much like textures of the original Halo: Combat Evolved from 2001 – though we spent extra on DLC to upgrade the crust to have garlic sauce, which enriched the base with a delightful flavour that would surely have been unavailable a decade ago. I was impressed with how they managed to work in peppers of all three colours, and the sallow grey of the chicken meat reminded me of Grunt flesh. One major flaw with the pizza, however: each of the slices took a couple of minutes to fully consume, which clashes with Bungie’s original ’30 seconds of fun’ design tenet. There also wasn’t enough cheese.

I’m a big Halo fan and I’m an even bigger pizza fan, so a Halo pizza should be a near-perfect amalgamation. While this special edition greasy feast sadly didn’t come in a promotional pizza box or include any toppings that scream Halo, it was very tasty. I’m not sure what chicken, pepperoni, mixed peppers and onions have to do with Master Chief and co, but hey, pizza’s pizza. They could have at least pretended the chicken was Moa and the pepperoni was Sea Worm.

We only sanctioned a review of the Halo: Combat Evolved Anniversary Pizza because it meant we got some free pizza in the office. Truth be told Martin could have produced the same few sentences with a single, smaller pizza, but I felt ordering three large, crown crust pizzas on the VideoGamer.com business card made more business sense. The biggest disappointment was that Pizza Hut and Microsoft appear to have made no effort to theme the pizza, merely slapping some albeit tasty toppings onto a cheese and tomato base. Having said that, had the pizza arrived as an outer ring, representing a Halo, we’d all have been pretty pissed.

Nothing says “nice, crusty Italian pie” like the ovalness of a near-perfect pizza, the innovative “meatball wedged into crust” idea, or the surprise finale when you work out what that red stringy bit is in the middle that makes up the official Halo Pizza. You can almost tell that when the man who made this pizza stared into its depths he was glad his four-year culinary degree led him to Pizza Hut. Sure, the naysayers might ask “What does it have to do with Halo?” To them I say “Mmnfnn mnnnffff ff fnn” with a perfect pizza lodged in my mouth. They’re not sure quite what I’m saying, but I’m sure somehow they know in their heart.