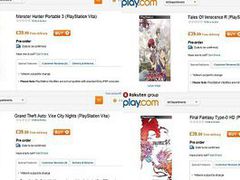 Grand Theft Auto: Vice City Nights is a new game coming to PS Vita, according to a supposed listing on Play.com which has since been removed.

The image of the Play.com listings – pictured above – is believed to have originated on 4chan, before being posted on gtaforums.

The listings could be real, but a few things don’t add up. Firstly, why is there no URL to the now removed listings, with a crudely made collection of screen grabs all we have go on?

Secondly, a poster on gtaforums believes the images to be doctored with proof being the fact certain elements of the page don’t line up with live play.com listings.

The supposed listings are all for titles either released in Japan or believed to be coming, that is besides GTA Vice City Nights. Monster hunter was seen running on PS Vita back in early 2011, albeit when the system was called NGP; Tales of Innocence R is already out for Vita in Japan; and Final Fantasy Type-0 has been confirmed for Vita to make use of the second analogue stick. These three games may have been deliberately chosen to add credibility to the GTA listing.