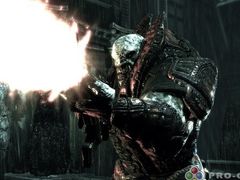 Spotted by eagle-eyed Gaffers, Gears Of War Pendulum Wars The Battle Of Aspho Fields, slated by book publisher Chapters for an August 26 2008 release, is the “first official prequel to the blockbuster new Xbox 360 game Gears of War” and “builds upon the characters back stories and gives eager fans their first in-depth look at some of the past events that shaped the games world”.

That’s great news, especially considering the plot-hole heavy story in Gears of War left us scratching our heads on more than one occasion. What we do know however is that Marcus Fenix, Gears´ meat headed star, fought in the Battle of Aspho Fields, which has become a legendary scrap at least in the game lore. In an early chopper scene in the game starry-eyed Cog Carmine asks Marcus: “Hey! Are you the Marcus Fenix, the one who fought at Aspho Fields?” Marcus: Yep. Carmine: Wow! Cool! Marcus: Not really…”

The book will weigh in at a meaty 352 pages, is published by Random House and will, we imagine, not come with an online cooperative game play mode. It is however written by US writer Steven L. Kent, ex video game hack.