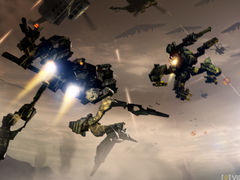 From Software is developing a new Armored Core

Dark Souls developer From Software is developing a new game in the Armored Core series, president Hidetaka Miyazaki has confirmed to IGN.

It also has a dark fantasy game in the works (that isn’t Dark Souls 4), and a game that fans will probably find “a little bit weird”. “When we actually announce the title, probably fans will react with ‘oh, what the hell is this very weird game that Miyazaki has created?'” he told IGN.

Armored Core is a mech shooting series that dates back to the 90s, with the most recent game, Armored Core V: Verdict Day, launching on Xbox 360 and PS3 in 2013.

A release window for the new game has yet to be revealed.