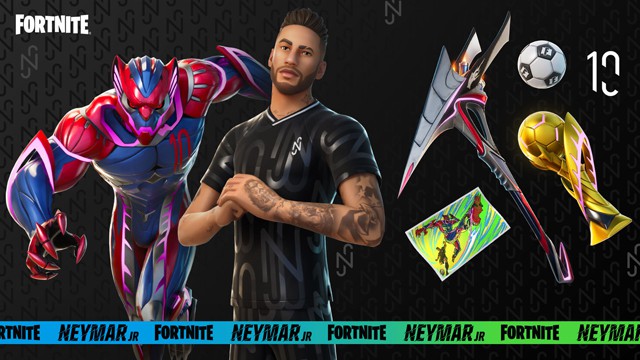 Real-life Brazillian football superstar Neymar Jr is the latest big name to come to battle royale shooter Fortnite, and there's a bunch of new content heralding his arrival from tomorrow.

A set of Neymar Jr Quests will go live in the Chapter 2 Season 6 Primal Battle Pass from tomorrow, bringing along soccer themed challenges with rewards including the Naymar Jr Outfit, the Joia Trophy Back Blong, the Jaguar Strike Pickaxe and the Shh Emote. That last one will also unlock his special 'Primal' form, a sort of Power-Ranger esque robo-cat suit that looks cool but, as someone who has only a passing knowledge of football, I can only assume is probably frowned upon by FIFA from being used in Neymar Jr's day job.

Completing Epic Quests will also unlock further rewards, as there's Exhibition versions of both the Naymar Skin and his Primal form that come in a fetching yellow, blue and green colour scheme also up for grabs. If that wasn't enough, Naymar and Puma will be taking over Fortnite Creative with a special Welcome Hub themed after Paris complete with soccer field.

Finally, a special solo tournament is set to take place on April 28, where players in the inuargaral Neymar Jr Cup will be able to compete for a chance to win a custom designed soccer boot that's been inspired by Neymar Jr's Primal form, with the top players in each region able to claim the prize. Check out a trailer for the new Neymar Jr set coming to Fortnite on all its usual formats from tomorrow below.