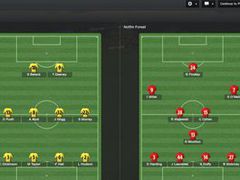 “And the extra sales we got in that two weeks is why we have managed to hire more staff this year.”

“The new game has a new system being used, and as of the time of talking the Beta hadn’t been cracked. If we can hold a few more weeks, it would be a benefit to retail and ourselves. And ultimately for the consumer, because once again if we do much better this year, we will invest that back into the studio, take on more people and do more features,” said Jacobson.

Signs are positive that FM13 will be a success, having made its debut at No.4 in the charts.

Jacobson says Sports Interactive is “expecting this to be the biggest selling Football Manager we ever had”.