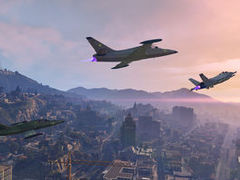 GTA 5 on PS4 and Xbox One is a great example of doing a remaster right, and it appears that the pretty great first-person mode isn’t the only major new gameplay addition.

A number of YouTubers have discovered that by consuming one of 27 new peyote plants found in the game world the player will be transformed into a wild animal – at least the hallucination makes them believe the transformation to be real.

So far seagull and chicken transformations have been discovered, with the former giving players the ability to fly around the game world and drop poop bombs on unsuspecting NPCs. The chicken appears less entertaining, unable to fly.

The YouTube videos below will show you where to find the two peyote plants, but there’s sure to be others with equally wacky transformations.