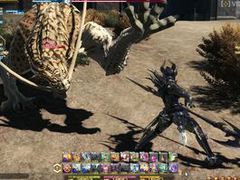 Square Enix has temporarily removed the digital version of Final Fantasy XIV: A Realm Reborn from sale until issues with the game’s servers have been resolved.

In an update on the publisher’s Facebook page, Square Enix said that the “overwhelmingly positive response to Final Fantasy 14: A Realm Reborn” has resulted in players “experiencing extremely long wait times… to be able to log in and play.

“As a temporary measure, we will halt sales of Final Fantasy 14: A Realm Reborn’s digital download products so we can accommodate all of those wishing to play. We are working to expand our server capacity in the coming days.”

The action comes just one day after the rebooted MMO’s official launch, and follows days of trouble experienced by early access customers.

Over the weekend, director Naoki Yoshida was forced to apologise to fans for the ongoing disruption, which saw players unable to login to the service after various forms of limitations were placed on the game’s servers.

Final Fantasy XIV: A Realm Reborn is a reworked version of 2010 flop FFXIV. The game features a completely new engine and story.