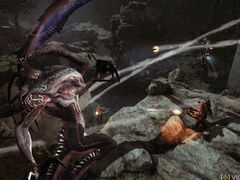 Xbox One and PC users will be able to download and play Evolve for free throughout this weekend, 2K has announced.

Four monsters, 18 playable characters, five modes and 19 maps will maps will be available to play absolutely free, with progress able to be carried over should you purchase the full game.

In addition, all DLC characters will be free to access on PS4, Xbox One and PC this weekend, with a free Meteor Goliath monster also available permanently from September 3.

Based on the Goliath, the Meteor Goliath features a new look, audio and attacks capable of increased range, including an enhanced Rock Throw, Leap Smash, Fire Breath and Charge.

Evolve launched on PS4, Xbox One and PC back in February but didn’t quite live up to expectations, scoring a 6/10 in our review.