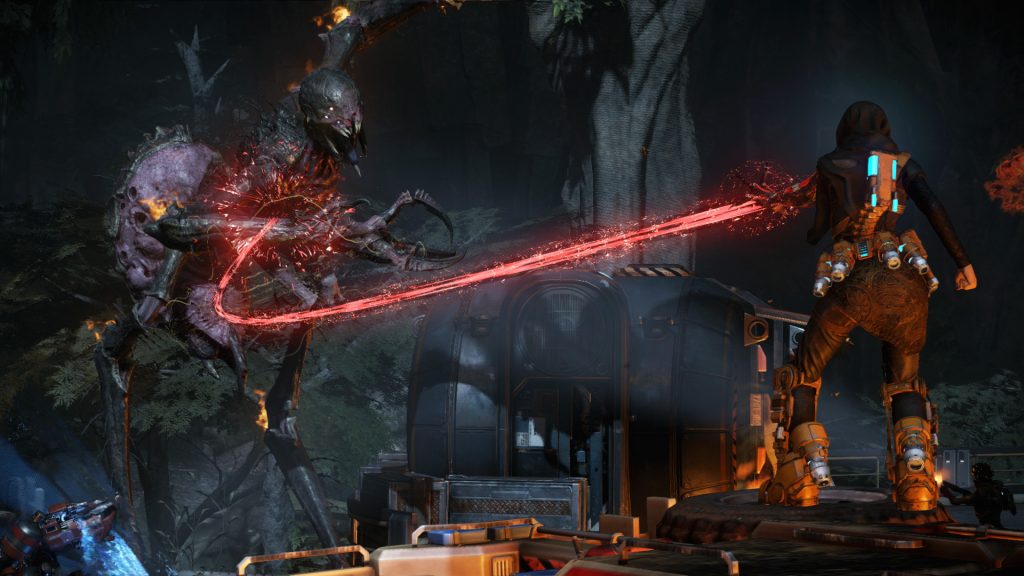 The game transitioned to a free-to-play model just three months ago but, by the sounds of it, hasn’t been successful enough to convince publisher 2K to continue its investment.

“It’s always hard to leave one of our games behind,” studio co-founders Phil Robb and Chris Ashton wrote on the game’s forum. “Left4Dead was no different and now it’s Evolve’s turn. There will always be a special place in our hearts for our past projects. No matter what happens with Evolve in the future, we’ll know it was born in this studio and developed by this team alongside this beautiful community.

“This is the life of AAA game developers who aren’t self-funded and don’t own their own IP. We don’t get to make the call. We all know that going in but we still sign the dotted line because we love what we do. We are happy to have gotten the opportunity to do something risky, something new and innovative. We created a brand new Sci-Fi world. We got to go to planet Shear and interact with alien flora and fauna. We got to hunt down, trap and kill giant monsters together. We got to BE the monster. What an awesome experience.”

The pair go on to thank original publisher THQ for believing in Turtle Rock’s vision “when we were that tiny studio in a little converted warehouse with a dream of making something truly different,” and to 2K “for picking up the mantle out of THQ’s bankruptcy and making Evolve one of the most anticipated games of 2015”.

“Most of all, we want to thank you, our players, for supporting Evolve and Evolve: Stage 2, many of you from the very beginning,” the continued. “You embraced our vision and fell in love with it just as we did. We have learned so much from you. Thank you all for your feedback, your support and your dedication.”

There’s no indication as to when or if the game’s servers will be shutdown, but the discontinuation of support means you shouldn’t expect any further DLC or title updates. The game will remain a
premium title on PS4 and Xbox One, too, with prospective plans to bring the free-to-play version to console dismissed.

Evolve launched in February 2015 and sees a team of hunters attempting to track and kill a player-controlled monster. While exciting in concept, the final game failed to blow us away, with our reviewer noting the game’s “lack of content and disappointing execution”. The game was reported to have shipped 2.5m units as of May 2015, although actual sales figures have not been revealed.

“Those of you who’ve followed Turtle Rock Studios, this is not goodbye,” the studio concluded. “We have lots of stuff in the works that we hope you’ll enjoy but we are departing on the Laurie-Anne for the last time and must bid a
farewell to the planet Shear. We’ll see you all again, another time on another world….”