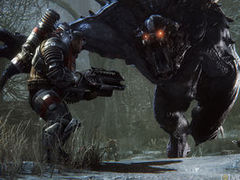 Evolve is going free-to-play, Turtle Rock Studios has confirmed. The 4v1 shooter will transition to a F2P model on PC as of today, with a console roll-out to follow later “should it prove successful”.

In a post on the game’s forums, co-founders Chris Ashton and Phil Robb admitted that the initial reception to the game “wasn’t what we expected”, ultimately leading to today’s decision to transition it to free-to-play.

“Sure, there were some good reviews. There were also bad reviews,” the pair said. “Yes, there was excitement. There was also disappointment – for players and for us. The DLC shitstorm hit full force and washed away people’s enthusiasm, dragging us further and further from that first magical pick-up-and-play experience.

“We want that magic back and we aim to make it happen. We’ve made a lot of changes, improvements and additions to Evolve over the past year and we’ve got a lot more coming. In short, we’re giving this game a vigorous overhaul!”

While the model has yet to be detailed in full (the game’s pricing structure has yet to be revealed, nor is it yet clear which content will be available to new players), anybody who owns the full paid release “will be given ‘Founder’ status in the new free version”, along with additional gifts, rewards and “special access” as a show of appreciation. “Why? Because you believed like we did, and we will never forget that,” Turtle Rock says.

However, the transition to F2P may not go perfectly to begin with, the studio says, warning players that “stuff could break”.

“Making Evolve free on PC is going to be a process that takes time and a lot of hard work, but we believe in Evolve and we believe in you, our players and want to do what’s best for both!” the pair added.

“Here’s how it’s going to work: We’re going to make Evolve free on PC as a Beta starting on July 7. This is going to allow us to hit our new server infrastructure really hard and we need your help testing. Stuff could break, and that’s our hope, because that will give us time to improve things as we go.

“We’ll parse out major Beta revisions, updates and features over a period of weeks and months — a plan we’re going to continually communicate here. This allows us to test new features and major changes to make our game more accessible and ever closer to the joy we saw when we first showed our baby to the world. Just as importantly, this Beta plan gives us the flexibility and time we need to keep fixing bugs and making Evolve more stable.”

“We have lived and breathed Evolve for over four years and we feel like we are just getting started,” Turtle Rock concluded. “Since launch we realized Evolve has provided people some of their most exciting gaming moments and we want to make more of those for everyone… well, everyone who is OK with being periodically murdered (brutally) by terrifying alien monsters.”

Evolve launched as a premium product in February 2015, although our review criticised it for its “lack of content”.