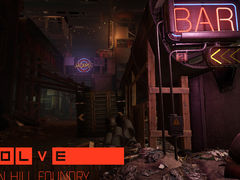 Evolve gets two new maps on March 31, first on Xbox One

Two brand-new maps will launch free for Evolve on March 31, first on Xbox One, then a month later on April 30 for PS4 and PC, 2K and Turtle Rock Studios have announced.

The first and largest bohrium mine on Shear, Broken Hill Mine produced the billions of tons of raw materials necessary to build the rest of the colony. Until the Monsters showed up.

Broken Hill Mine is a deep labyrinth of caves running below the surface of Shear. The cave system divides into three visually distinct areas: One area is a rock quarry, a venom hound nest is set in another, and the last zone has a massive conveyor belt running through it. These surround a central drill chamber.

Hunter Win: Mining Drones get repurposed as Shield Drones for the Hunter team in the next match.

Monster Win: Destroying the mining drill makes the environment tectonically unstable. The resulting earthquakes will flush out birds from the surrounding areas, deceiving the Hunters as to where the Monster is really located.

Along with iron, nickel, copper, and aluminum, the Foundry smelts the tons of ultrastable bohrium produced by the mine. There are several foundries dotted across the colony, and Broken Hill’s is the largest.

Broken Hill Foundry gets you out of the wilds of Shear and into an industrial complex. It’s an overlapping mix of open areas, corridors and low ceilings create new tactical options for both Monster and Hunter players. In the warehouse alone, there are three levels to stalk prey. Another area takes you through the streets – and to the rooftops – of Slagtown where a Monster can be lurking around every corner.