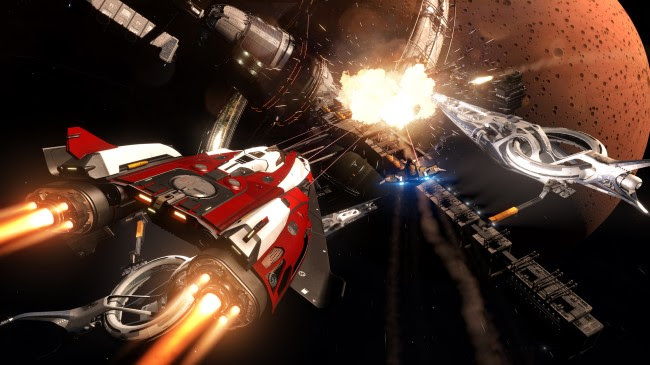 Elite Dangerous: Beyond – Chapter One will be released on PS4, PC, and Xbox One on February 27, Frontier Developments has announced. Beyond represents the third season of Elite Dangerous, and will be made available free to all players.

According to the press blurb, Beyond will roll out a number of key enhancements that have been requested by the community, as well as expanding the core narrative with new content drops.

Chiefly, the game’s crime and punishment system will undergo a major overhaul, resulting in a greater response to the player’s dodgy dealings. This in turn will offer a more competitive and fairer Open Play experience, with repeat offenders having the pleasure of the Advance Tactical Response on their arse.

In addition, notoriety levels have been bumped so that there’s now greater consequences for your unscrupulous actions, and Hot Ships now attach crimes to the player’s spacecrafts.

Elsewhere, February 27 will also see the release of a bunch of new contacts for Elite Dangerous Horizons owners, while GalNet Audio will provide an easily accessible source of news for players. You’ll also be able to strap yourself into a new ship known as The Chieftain.

Finally, Beyond adds a trade data overlay allowing you to easily sniff out the best trade opportunities in the Milky Way, and the engineering system has been beefed up to ensure guaranteed improvement during crafting.